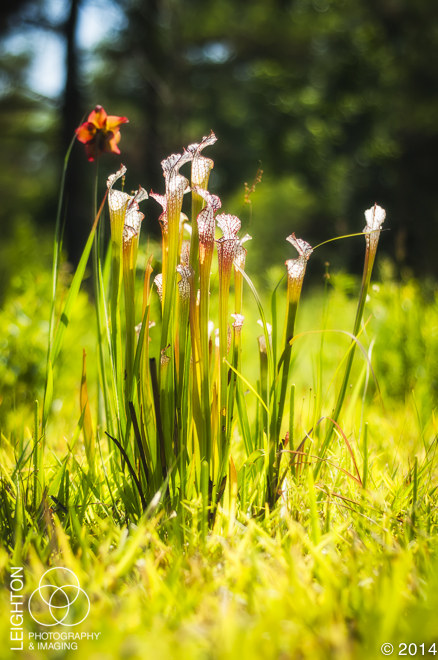 Easily the most beautiful of North America’s native pitcher plants, the white-topped pitcher plant (Sarracenia leucophylla), also known as the white trumpet or crimson pitcher plant, is found in the wild in the American Southeast in the states of Mississippi, Alabama, Florida, Georgia, North Carolina. There are reports of this plant found growing in specific locations in New York, California, and Washington State, and these are most likely the result of carnivorous plant enthusiasts introducing them as non-native species to locally suitable habitats (which is never a good idea).

Outside of Thomasville, Georgia – notice the tall crimson flower

Like many of our native carnivorous plants, the white-topped pitcher plant requires a very specific habitat in which to live, and these are increasingly under pressure from land development, watershed and land drainage changes, climate change and simply over-collecting of wild specimens (either by hobbyists or the commercial dried-flower trade) in often already-stressed wild populations. Other factors include forest encroachment in areas where local fire management alters the nature wildfire cycle of the region.

Look closely and you can see the 13-14 gnats tangled among these hairs, guiding the struggling insects into the trap.

Every white-topped pitcher plant “patch” I have found in the wild throughout its range was growing slightly downhill of pine forests, in areas with long-term standing water with acidic sandy soil and lots of sunlight, typical of most bogs found near where pine forest edges meet savannah ecosystems on the Gulf Coast. They are typically found with other types of carnivorous plants and water-loving terrestrial orchids. Officially classified as an endangered species, there is some good news: several large colonies are thriving on private/restricted properties throughout its range, and therefore provided with a little more protection from poaching, particularly a very large and healthy population on Eglin Air Force Base near Pensacola, Florida.

The beautiful and intricate design of red veins in the white-topped pitcher plant.

Like all pitcher plants, these plants live in places where the soil is extremely nutrient poor and many other plants cannot survive. Pitcher plants make up for this deficiency by “eating” insects, and the occasional reptile or amphibian. Pollinated in much the same way as other flowers, the white-topped pitcher plant produces a very beautiful, deep crimson umbrella-like flower which rises a foot or more from the plant, along with modified tubular leaves that form the pitcher, getting wider as the top until it reaches the bright, shiny crimson lip of the tube. Both the throat and lip of the pitcher plant are dramatically patterned in reds, purples, and whites to attract insects. The lid formed by part of the leaf above the pitcher contains backward-facing hairs that force the insects toward the gaping pitcher, which is particularly filled with water and an enzyme that will digest the trapped prey, providing the necessary nutrients it needs to survive and flourish.

White-topped pitcher plants growing in a North Florida bog among a healthy population of threadleaf sundews – another carnivorous plant.

With any luck, the remaining wild populations will thrive in their many protected sites, and possible new regionally local habitats will be found where they might be introduced to enable more genetic diversity and a wider native range so that if some populations do get wiped out by increasing environmental and developmental pressures, the species as a whole will still remain viable for the long run.

The elegant and beautiful white-topped pitcher plant growing in a Liberty County seepage bog. This location is possibly the easternmost population in Florida.

Visit here to see more native pitcher plants and other carnivorous plants in the wild.