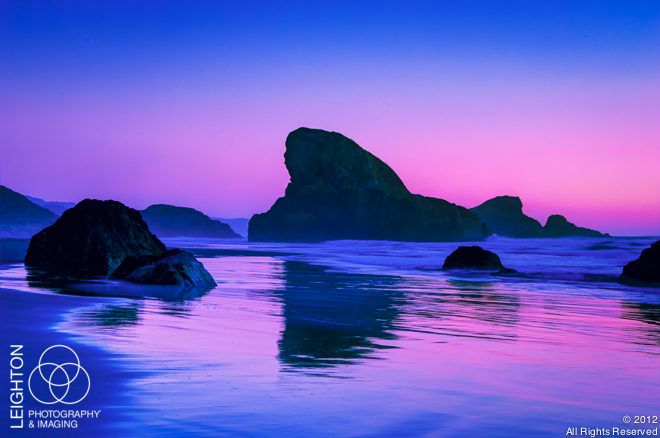 Last week I had an unexpected two-and-a-half day opening in my schedule and I pounced on the opportunity to visit new places and reconnoiter some new locations. The idea was that I could find/scout out potential photography hot spots and mark them on my “places to shoot” list for future, well-planned excursions. Initially, I was looking at the Washington/Idaho border, but a last minute decision (hours before departure) turned my attention on the Southern Oregon coast and the redwoods of Northern California.

It was unfamiliar territory for me, unknown geography, and I had a vague, hastily handwritten list of numbered places to check out on a post-it note in my wallet. No rain in the weather forecast, and it looked like this trip was a go!

This image was one of the very last of the trip. The sun was setting, I was freezing from being in the seawater with my regular clothes and hiking boots because I was shooting this seascape at various angles not always possible from the beach itself, and I’d hardly slept for the past two nights. All of this and the fact that I was super-fueled by black coffee – I was primed for making interesting photographs of these ancient monolithic sentinels of basalt and time.

The sea stacks of the Oregon coast are a mecca for nature photographers worldwide. I’ve often heard from other photographers and world travelers that this area of the country is the most beautiful shore on the planet.

In an effort to keep this post short, I’ll be posting single images and stories about my impressions made and images collected along the mind-blowing 1244 mile trip. Check back often as I’ll be posting new images frequently.