Battle of the Bulls – Breeding Season in Elk Country 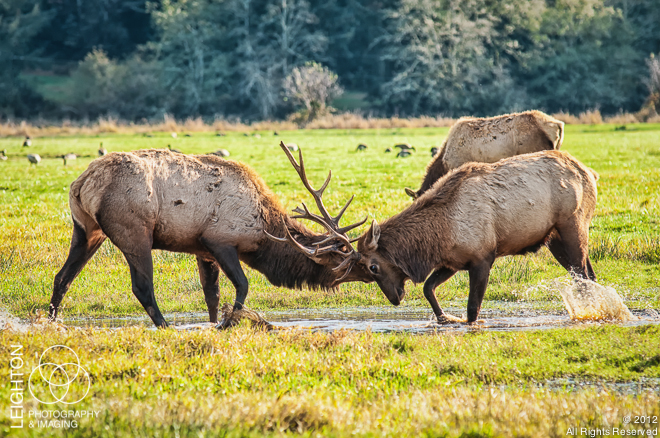 Early last month I was driving through the mountains of Oregon heading to the coast when I spotted a small herd of elk in a meadow at the foot of a steep rise of one of the many heavily forested highlands in the region. There were about 30 females (cows) and about a dozen calves among them, peacefully and gracefully spread about the field. Most resting in the warm late afternoon, golden glow of sunlight, while about half a dozen were standing and gently grazing on the thick, lush grass (already becoming straw) of autumn.

After stopping and getting some images of the herd, I continued onward to the coast. Barely a minute went by and I saw another herd of males near the road. I got out with my gear and got into my routine: set shooting points in concealed positions, check for light direction and time of day (golden light moves really fast), positions to maximize good light, and animal behavior in regard to position and pose vs. light. It might seem complicated, but it really isn’t. Herd animals often face the same direction. I’m unfamiliar with elk, and under-cautious. I like to get close, but take my time not to spook the animals. My gear is spread across an arc of meadow, and I’m calmly strolling back and forth to different positions. Tucked under a shrub, lying in tall grass, manning a fixed tripod….. realizing that my U.S. Army training might have been the best education ever in the field of nature photography. It’s go time. Huahhh!

A pair of elk bulls violently clash together in a fierce display of strength in an attempt to control sole breeding rights with the nearby herd of females.

Sitting cross-legged in a clump of yellow dry grass at the edge of the meadow, two of the bulls I’ve been watching square off. I don’t know what’s going on, but since there are zero elk back home in Florida, these thousand-pound “deer” have me completely enthralled. I’m squatting in a clump of grass when “CRACK!” – these two bulls suddenly lunge at each other and lock antlers! Instantly in awe of their strength, power and weight, I realize I’m only about 35 feet from the fight. The shooter in me is calm on the shutter and adjusting exposure, f-stops and range during the battle, but a small voice in my head (the lizard brain) is asking if I’m ok, safe, and protected. Don’t care, deal with trouble if it happens – this is your life and your job. Focus on the here and now.

A small herd of female elk (cows) gracefully sleep or graze in the late autumn afternoon sun in Central Oregon, while less than a mile away – a herd of bulls compete for dominance of this harem, of which there will be only one winner.

About five minutes later, I’m waiting to see the final route of the loser, and the ultimate triumph of the stud of verile masculinity and war. But both elk are tiring. As they still torque each other’s heads left, right, up and down – now they begin to sound like a couple of mewling emo kids pulling each other’s hair. (these were my exact thoughts while shooting…. sorry)

Whoever wins, and if he doesn’t get challenged again – or badly injured in the next fight – the top bull gets sole breeding rights to the entire herd of females – at least those that are breeding this season. Here’s the important thing – the females don’t need the males. They only need one male. The strongest and healthiest of bulls will sire the next generation, and these offspring will fight to be the strongest and healthiest in future seasons.